Recently discovered: A wonderful review of Jeri’s first album, “Jeritree’s House of Many Colours” by Peter Harawick on Jen Monroe’s fantastic website for music lovers, Listen To This, posted in September, 2018.

Here are excerpts from his review:

“Hilderley’s vocals are shimmering specters that emerge from the stereo and linger in space long after the record has stopped spinning…. For me, the true delight here is the final piece, “Through Your Blue Veil,” a stirring devotional tune in which Hilderley somberly returns her lover’s assorted virtues, somewhat tarnished (“I give you back your perfect mouth/Less perfect since I have known you”). Its emotional power is shocking, disarming, and without comparison.”

“The power of House of Many Colours is in many ways demonstrative, and it more closely resembles a kind of praxis than a display of artistic talent or ambition. Its politics operate on a broad formal level, without slogans or entreaties to identify or exclude. I am reminded happily of the experiments of Brazilian artist Lygia Clark, who by 1970 had given up plastic art for individualized psychotherapeutic encounters, or what she called “ritual without myth.” I can think of no better way to describe Hilderley’s stunning achievement.” More

Peter Harkawick, a sculptor, has recently opened a project space in L.A. In his words about his creative process: “For me, making art is as much about bringing a “new” thing into the world as it is about noticing and pointing to moments in the past. It makes me so happy when I can share the art that has inspired me.” Check out his website, Real Pain Fine Arts.

Please visit Jen Monroe’s site, Listen to This, and read Peter’s review. Then listen to Through Your Blue Veil from the vinyl. And while there, stay awhile and research (and listen) to the amazing array of music Jen has made accessible to us on her website.

In her words: “Listen To This came about as a way to share music with friends, though happily it’s led to people I’ve never met sharing music with me. Listen To This focuses on ambient, Japanese synth pop, and new age music. I don’t want to promote illegal downloading so much as give people a chance to test out music that they might not otherwise hear. A lot of these records are out of print and can no longer be purchased in a way that benefits the artist. That being said, if it’s available and you like it, I encourage you to buy it, ideally directly from the artist’s website.”

She selects/invites artists to review the music she has discovered, loves and tends with great care. In Jeri’s case, she selected Peter Harkawik, an established sculptor, to review her album. Peter’s review shows an uncanny and deep appreciation of what Jeri was doing and meaning in this work done four decades ago, 1978. Jeri’s long vocal and instrumental song-incantations about a woman’s creative visions and powers (her own) are sung and played with marimba, cello and other percussion instruments. It’s fascinating to read what an artist in 2018, four decades later, hears and feels about Jeri’s music, created and performed within the blossoming Women’s Music phenomenon of the 70s, 80s, 90s.

In 2020, Seawave Recordings will re-issue this vinyl with its cover photograph by Elena Sheehan, along with detailed information about the process of creation and recording with Marilyn Ries on the back, just as it appeared in 1978. A digital download will also be available on this site: SeawaveRecordings.com. 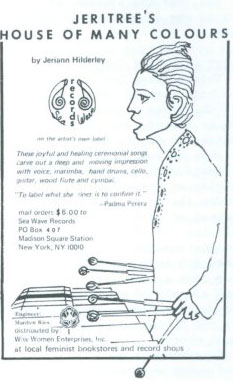 It took time to approach Jeritree’s House of Many Colours. Its uniqueness was scary. I wasn’t accustomed to listening in the way this album demanded I listen. The music is avant-garde, improvisational as well as compositional – meaning, as she writes on the liner notes, “direct improvisational expression integrated with carefully worked out structures and conceptualizations.” One might call it “classical.” Another might call it “jazz.” It could be either or both, but I think it defies classification.

Jeritree (Jeriann Hilderley), the LP’s creator, is a renaissance woman singing her poetry while playing marimba, percussion, cello, guitar, and wood flutes in various combinations. The studio technique of overdubbing – allowing a musician to play duets, trios, etc. with herself – is utilized tastefully to create an accompanying ensemble of instrumental sounds all made by Jeritree. (Marilyn Ries, engineer, must be given special mention here for making it work so well.) The only thing missing might be the special interchange between various musicians that makes for added musical excitement.

Those who listen with preconceived notions about singing, open your ears! A visual artists friend of mine, on listening to the album, compared Jeritree’s voice to that of Piaf in its strangeness, its rapid vibrato, its emotional depth. It is a voice that knows pain and joy and feels it to her very gut, a voice indescribable in its otherworldliness – not trained, not stylized, not cultured. She chants, wails, touching places in us where deep feelings hide. It is an intense voice.

The first of four compositions, “Sea Wave” opens the record with a roll of the cymbal like an ocean swell and rich low marimba tones. The poetry Jeritree sings is of Sea as Woman, as mother, as bringer of new things and taker of old. The marimba, Jeritree’s primary instrument, evokes sea sounds, bubbling and flowing. “Mama, la mar! Ah, la Diosa!” (“Mother, the Sea! Ah, the Goddess!”) She chants a modal melody as the instruments create an aural picture of waves. The gu8itar enters at one side for stereo interest, though mixed a little high for my taste. Measures and meter disappear. New rhythms are superimposed over old to create a moving texture. “Sea Wave” fades out with the swell of cymbal, the depth roar of cello, constant as the sea herself.

The marimba tracks, syncopated, make music like rain falling on hollow logs, introducing the vision in “Song of Vision and Creation.” Here Jeritree is earth spirit, en-chanting, “I am enchanted.” The poem is that of a tribal witch watching her creation grow from tiny seed’s planting to what she makes of it, what she calls it. Wood flutes play eerily in the background sounding like those of South American Indians, unpitched and reminiscent of the wind. And then a dream section echoes and Jeritree creates sounds of water and wind vocally, such like our ancient mothers vocally created vibrations sympathetic to nature’s sounds, nurturing through magic syllables. The vision returns after what for me is a disjointed and unsuccessful instrumental bridge, and the marimba flows, water and earth merging. “As the waters flow, tree will grow.”

This piece is the most adventurous musically, beginning with the vision in C major, going to the Phrygian mode on E, and ending on a D minor chord. Musical theorists may swallow their harmony books on hearing this progression. Cellists may be astonished to think of her playing cello by hitting the strings with a percussion mallet. No matter. Stepping away from tradition is what makes this work exciting, important, and innovative.

“House of Many Colours” is the most structurally complex piece on the album. It seems to hold together the best for me. Composed in the Phrygian mode, as are both preceding works, “House of Many Colours” explores as many vocal and instrumental colors as one can imagine and more. Here Jeritree uses her voice to best advantage, soaring, dipping, crying, circling, reminding me of the Peruvian Indian singer, Yma Sumac, and her extra-ordinary vocal forays.

Like “vision,” “House” feels very earthy, very influenced by American Indian music. In fact, a Pawnee chant introduces the middle section, which becomes interestingly stereophonic, vocalized against chat against vocalize. A pagan religious work, “House of Many Colours” transforms the words “All one” to “Aum” and poetry shows Woman awakening to colors around Her and within Her house/temple/body/earth.

The final work, “Through Your Blue Veil,” sung accompanied by marimba alone, has the most traditional form – verse and chorus with extended final verse. Surprisingly, after the modal pieces, it is in C major! Use of a major key is unusual for a song grieving a lost love. It makes the experience one of strength and growth. Again there are many free-form unmetered accompaniment figures, but here they fall into an expected pattern. Perhaps this work is an earlier one than the others. It is certainly more conservative.

Is Jeritree of this time? Or is she a soul from an ancient, uncivilized time? Somehow with her LP, this artist reached me in a gut place. Battered by patriarchal technocracy’s metal music, I was taken to a place inside myself, a place that, when hearing Jeritree’s earthsong, made me remember, even painfully, what it is to be simple, basic, at One with Mother Nature.