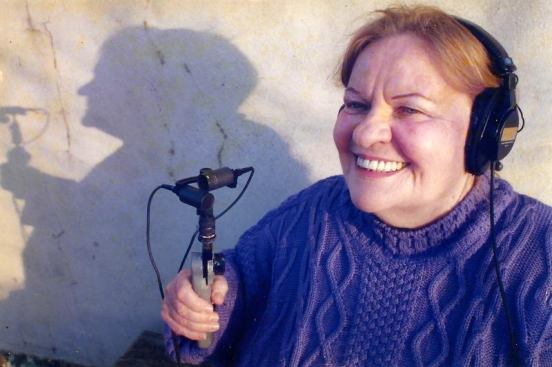 We mourn the passing of our beloved audio engineer, Marilyn Ruth Ries

Marilyn Ruth Ries, first prominent woman recording engineer in New York City has died. A star of the Women’s Music Network phenomenon which burst forth in the 70s, Marilyn’s masterful and innovative recordings brought hundreds of works by women composers and singers to a world wide public, forging the certainty: Yes, there are many, many women composers. I was fortunate to have Marilyn as my recording engineer for two of my albums, Jeritree’s House of Many Colours, and 12 Meditations on Love. Marilyn was deeply loved and is deeply missed. We mourn with you, Sorrel.

With great sadness and terrible grief I send you the news that my partner of 32 years Marilyn Ruth Ries died this past weekend. She had a sudden and massive bleeding in the brain, so was past pain or suffering very quickly. She asked to be cremated so that happened this week and I’ll hope to be in touch with you about a gathering for her memorial service. Her 50 years recording and producing everything from hundreds of children’s books, adult audio books, with actors such as Peter Thomas and Lynn Redgrave, and her hundreds of music recordings, including on the label she founded with Kay Gardner and Betsy Rogers: Wise Women Enterprises; and her tireless and loving support of me in the many productions we did for West German Broadcasting, the video film “C.D. The Ritual of Civil Disobedience”, thousands of sound effect recordings—– oh how the music prospered under her wise mixing and acute ear for the just right mixture of voice levels, noise levels, stereo effects. The first female engineer in New York she stepped into the engineering arena when she had to fight for studio space and to be accepted by her male colleagues, and then admired and loved for her skills and spirit. She made the transition from analogue recording to digital audio magic and was just investigating her new iMac and Pro Tools equipment when this happened.

We married August 6 (our mutual birthdays), 2015, when it became legal, though we took domestic partnership in New York City in 1989. We moved from Manhattan in 2008 to make our home in Haralson County, Georgia, where Marilyn built a recording studio next to our cabin on a small lake among quiet woods.

I celebrate her life well lived with gusto, as I mourn her absence.

Among her productions were hundreds of audio books for children with Troll and Scholastic Publications, which she recorded, directed and mastered. With the resurgence of audio books for adults in the mid 1980s, Marilyn and I scripted and codirected books, which she recorded and mastered, for Warner Audio and Bantam Books, notably the massive “The Mists of Avalon” by Marion Zimmer Bradley. Other audio book productions she engineered include Olive Ann Burns’s “Cold Sassy Tree” narrated by Richard Thomas, and “Prince of Tides”.

Marilyn graduated from Cooper Union and Pratt as a painter and sculptor; she supported herself while she painted by working for Children’s Aid Society of New York City. As an odd job she assisted at a recording studio and discovered that she had a talented ear for recording and mixing sound, so she apprenticed to master engineers and worked nights in studios to learn the profession. She built her own studio at Barrow Street in the Village, then moved to West End Avenue when analogue became digital recording. Among producers she worked with were Phyllis Dolgin  for ESL programs, and Helen Borton on “A Sense of Place”, Peabody Award winning NPR series.

In the 1970s/80s of the women’s music movement Marilyn began recording and doing sound reinforcement for feminist musicians and comedians: Alix Dobkin, Holly Near, Sweet Honey in the Rock, Kate Clinton, Malvena Reynolds, Margie Adams, Alive, Jeritree, Penny Whistlers.  She was engineer and coproducer with me on my documentary play “Disarming the World- Pulling Its Leg” with Caroline Cava in the lead role of a women’s peace camp protester, for WNYC. She engineered works for German broadcasting, Westdeutscher Rundfunk, including my “Dream in Her Mind”, recording opera singers in New York and bringing for mix to the Cologne studio of WDR; and was mix engineer for director Klaus Schoening for WNYC of the Peter Handke play “Hoerspiel”. She recorded the Irene Fornes play “Hunger” for WNYC and other public radio stations, produced by New Radio and Performing Arts. Other projects involved mixing contemporary piano with electronics, among them Loretta Goldberg albums.

Marilyn became fascinated by the possibilities for video painting when colorizing and other video processing came around in the 1980s. She and I produced several videos using vintage equipment such as the Paik-Abe colorizer  at Experimental TV Center in Owego, New York: “C.D. The Ritual of Civil Disobedience”; and “Flowing Quilt”.  a Marilyn video painting from footage at Cade’s Cove waterfall. For a Whitney Museum audio art festival exhibition she coproduced and recorded the audio track for my “Sound Shadows” music with dancer as percussionist, oboe, didgeridoo, electronic saxophone, and sampler keyboard. This was a very complicated production, simultaneously live, and also recorded for later broadcast, with dozens of audio lines feeding from sound sources activated by the dancer’s feet.

I met Marilyn in 1985 at the preview of a film she worked on, “A Women in Nicaragua Speaking” by Sara Halprin. From then on the projects never stopped. One such began as a music for West German Radio in a piece called “Love in Space”; then became a video “Touch of Touch” with Mary Gemini, Clsuf,  Janet Lawson and Julie Liebermann, and in 2009 part of an opera “TOOWHOPERA” commissioned by the Georgia Music Teachers. Marilyn painted the backdrop for the video and recorded and mixed the music for all the productions.

One of the most fascinating projects was “Echo: Whatchasay/Wie Bitte” which involved recording echo sounds all over the world, and also interviews about interior reverberation with acoustic designers such as Russell Johnson, who designed acoustics for the Dallas Morton Meyerson Symphony Hall. With snowflakes falling she recorded from a boat on the Koenigsee in Bavaria, the echoes returning in tempo as a trumpeter played a slow folk tune towards cliffs where mountain goats stopped to listen; the reverberative cliffs of Canyon de Chelly with our Navajo guide shouting ‘Yá’át’ééh’; the many echo sound from mesa tops in a cove at Lake Page, Arizona; and mixed these interviews and echoes with sounds gathered in Beijing from the Temple of Heaven Three Echo Steps, and Waimea Canyon in Hawaii.

A twenty-year project she pursued with me was collecting lullabies for Touching Sound, A Living Lullaby, 2012, a book with two cds about how music affects the emotions as well as the body through simple songs and sounds. From a Turkish hallway to a New York City apartment to a farm in north Georgia, she recorded women and men in baby songs. This text is used in World Music classes.

Marilyn’s grandfather Ries was from Kassel, Germany, a hardworking farmer. Her mother was French-American. Hardworking, resilient, stubborn and generous, and unafraid to try new things. Hers a life fully lived.